With my first randonée ski race rapidly approaching on January 18th, I need to kick my training into high gear. Of course, that doesn’t mean I can’t have some fun while doing it.

On Friday, Ian and some of our friends from Carbondale went for a backcountry ski tour in the Marble area. We decided to ski Treasure Mountain, across from Marble Peak hoping that the snow on its western slopes would be a little more stable. The skin up started right at the mouth of Yule Creek, which, Ian pointed out, becomes an impressive Class V+ kayak run in the spring. Anyway, it was a solid two-hour climb gaining about 3,000 feet, with views of the Yule Marble Quarry and the surrounding Ragged Mountains.

View of the Yule Marble Quarry. The marble mined here is some of the purest in the world and has been used to build the Lincoln Monument and the Tomb of the Unknown Soldier.

One of the abandoned quarries on Treasure Mountain.

B-Town at the summit. 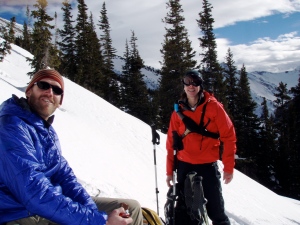 Mike and I enjoying some sun at the summit. 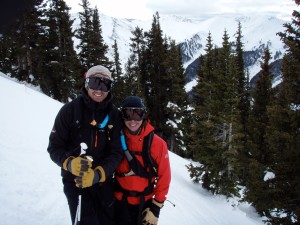 Ian is not really this much taller than me.

Brian dug a pit on the aspect we planned to ski, but the news was not good. There are still several weak layers in the snowpack and the conditions are pretty tender. Brian got a one-foot slab to shear in the pit with just a shovel cut. Sketchy. So, we skied on high avy alert and stuck close to the trees and our skin track. The snow was variable; some crust, some windblown and some soft powder, but overall, we had a great day.

Today, we woke up to about four inches of fresh snow and it was still coming down hard. My parents insisted we take advantage of their babysitting and go skiing again. So, Ian and I headed up to Aspen Highlands where it took about an hour to skin up to the Merry-Go-Round restaurant. From there, we hopped on the Loge lift to the base of Highlands Bowl. I skinned up to the top of the Bowl while Ian bootpacked. Along the way, I settled a little bet between us and proved without a doubt that skinning up the Bowl is definitely faster than hiking. Anyway, after about 45 minutes, we summitted and then enjoyed some great turns on G-6 through about 16″ of fresh snow. 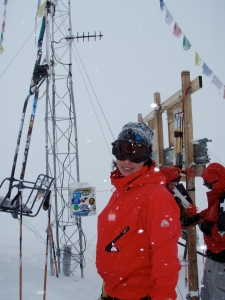 Looking a little preggo with skins under my jacket atop Highlands Bowl.

At the end of the day our legs were cooked. It was a terrific weekend of skiing that I can also count as training–not bad. I’ve got a busy winter of racing planned…check out my schedule here.