**Update** Check out my good friend Jeffrey Kapahn’s photos from the weekend. Jeffrey and I go way back to Vail – he’s a super talented photographer and a jeweler (he designed my wedding ring!) 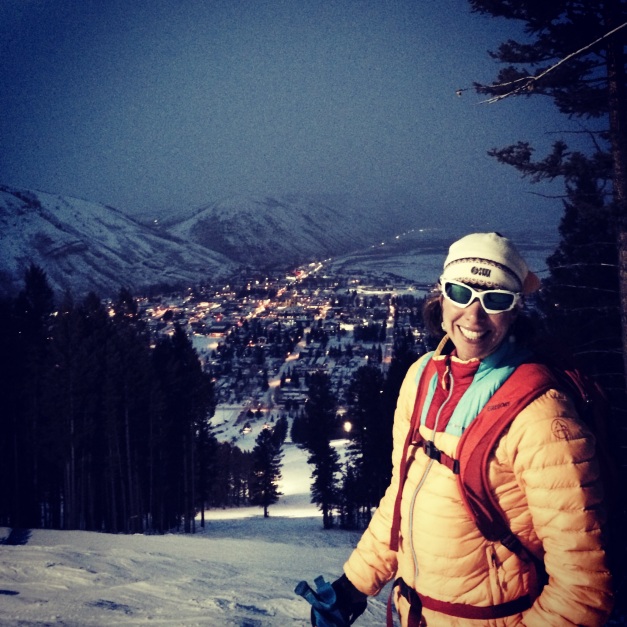 Views of Jackson from Snow King

If the La Sportiva Irwin race was my reintroduction to skimo racing, then the Wyoming Randonee Roundup was a full immersion. Three races in two days definitely put me to the test. Whether it was denial or pure naivety, prior to last weekend I had convinced myself that I hadn’t lost my endurance despite not racing in more than a year. I’m not sure if it was a lack of endurance, missing my top-end race pace, or the lack of articulation on my ankle, but by Sunday’s race at Jackson Hole I was a bumbling greenhorn.

Racing began on Saturday morning at Grand Targhee Resort on the Idaho side of Teton Pass. In the past, the Targhee race has been on Sunday after nationals at Jackson on Saturday. Therefore, I’ve never been fresh for this race but this year I felt a little stronger. I reached the top of the first climb just over a minute off of Stevie Kremer–about where I expected I would be. Despite a cartwheeling crash and a small hike back up for my pole, I came into transition with Stevie still there. Although I could see her for much of the second climb, she was already gone by the time I reached the top of the boot pack and transitioned for the second descent. Starting the last climb, I told myself to keep doing what I could do even with Stevie almost four minutes ahead. After a final frigid tuck descent to the finish, I came in under three minutes back.

After the Targhee race, there wasn’t much time to do much but eat, hydrate and get back over to Jackson for the circuit race at Snow King right that started at 6pm. Snow King is small mountain with just two lifts, but it’s a great resource for Jackson locals as they allow uphill traffic all hours (Jackson Hole does not permit any uphill traffic except for the race). Forest Dramis, Cary Smith and Pete Swenson set a fun course of about 6-8 kickturns, a boot pack and a descent through some gates. We completed the circuit for 3 laps with a small uphill finish. It was very spectator-friendly and great to have so many people heckling and cheering us on. After just 23 minutes of racing, I finished 41 seconds behind Stevie. That girl is fast!

After an early bedtime, I woke up Sunday morning feeling a bit off but ready to get race #3 over and done with. I was nervous about the weather as it was forecasted to be very cold with lots of wind. And for once, the weather people were correct. The base of Jackson Hole was mild but it was -9 degrees at the top. At the start I stuck to Stevie’s tails as long as I could but I found myself slipping back after about 12 minutes of racing. By the time we reached the top of the first climb I was over two minutes back. Telling myself to race my own race just like I did in 2012, I continued to push myself and managed to pass a few men. Although Stevie continued to put a little more time into me with each ascent, I stuck with the guys I’d been racing around for a while and we created a small gap over a chase group.

Coming into Corbett’s Couloir, the wind was fierce and my hands were numb (despite having hand warmers in my gloves) so I stopped to add over-mitts. We all knew we had to suffer through the short climb to the top of the tram so we could descend back to the bottom of the resort and get out of the wind. I went into survival mode at some point and was happy to begin the long ski down. Normally I enjoy the final climb of the race. But this year, with a lack of snow, the skin track was almost non-existent and I struggled to get a flat ski on the snow with my bad foot, causing me to slip every other step. And this is where I went backwards. Frustrated and feeling defeated, I almost dropped out with just a few kickturns left. I forced myself to keep going and finally I made it across the finish line almost 13 minutes behind Stevie and over 20 minutes slower than 2012.

I was so relieved to be finished – it felt like I had raced a six-day expedition adventure race. But I was also frustrated with my performance. It sounds silly to complain when I finished in 2nd place, but performing to the best of my ability is more important to me than my standing. Having a bad race comes with the territory and it happens to all of us. For a few hours after the race I had decided I didn’t need to race again, but eventually I felt motivated  to train harder, do more physical therapy and get myself back in the game.

Big ups to Stevie and John Gaston, who completed a clean sweep of all three races in pretty convincing fashion. They’re both going to be hard to beat this season. Full results here.

I took the day off my skis yesterday and then went back to racing on Wednesday night for the first of the Highlands Skimo Series. Over 25 people showed up for the race, including lots of first-timers, which was great to see. My legs were certainly tired, but thanks to a wrong turn by a bunch of the field, I finished near the front. Next up I’ve got the Sunlight Heathen Challenge on Saturday. I hope and trust all this racing will help get my fitness back to where it used to be. Hope to see lots of you this weekend!