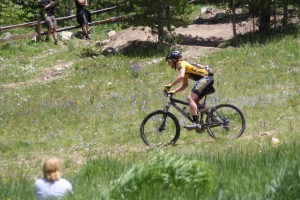 Well, the Firecracker 50 didn’t go as planned.  I knew it would be extremely tough for me to defend my national title from last year with the likes of Heather Irminger, Gretchen Reeves, Pua Sawicki and Mary McConneloug racing this year.  However, I had at least hoped to put in a good fight and have a decent race.  Neither of those happened.  I felt like I could barely keep pace in the neutral roll out of the parade and it just got worse from there.

I suffered through the first climb and singletrack and quickly realized I was getting nowhere fast.  Racing lightheaded and feeling generally miserable was not the best thing for me as I was swerving all over the trail and becoming a hazard for other racers.  I also knew I had two more weeks of racing coming up and it was not smart to completely wreck myself in the 50 feeling that bad.  This unfortunately led to me dropping out of te race early on which I’m still bummed about.  I know it was the right decision but I hate dropping and not finishing.  Hopefully more motivation for next year.

Juniper and I are in Rhode Island with my family enjoying the beach and water while I get ready to head up to Vermont for the XTERRA East Cup in Sugarbush on Sunday.  I still feel pretty terrible with a nasty cough and sinus issues but I’ve managed to get in a swim in the harbor, some running and flat riding.  Keeping my fingers crossed for Sunday that I’ll feel much better!