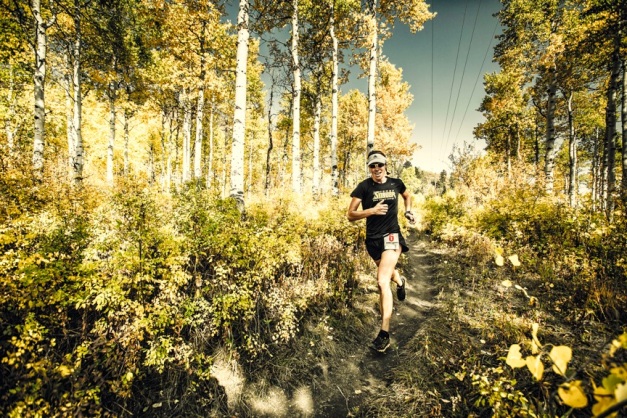 Thanks to Dave Clifford for the great photo

The last race on my schedule this summer was the Golden Leaf Half Marathon in Aspen this past Saturday. Only a week after the MTB marathon nationals, I had no idea how I’d feel come race morning. What I did know is that last year’s winner, Stevie Kremer, would be missing but that many other strong ladies were registered including Lindsay Krause. As a sure sign that this race season is over (at least for a few weeks), the battery in my heart rate monitor strap died as I was warming up. I was a little bummed because the first climb up Snowmass always produces a high heart rate, but I was also secretly relieved to run free of the numbers and data.

With fast men in the group like Rickey Gates, Karl Remson and Lance Armstrong, the field quickly spread apart in the two miles of steep dirt road climbing before we hit the singletrack. I started on the yellow brick road, aka The Government Trail, right where I wanted to be– in first for the women. I took a quick glance behind me and didn’t see any women coming, but I knew I needed to push the pace the entire race. I think Lindsay Krause is probably faster than I am on the flats so I needed to have a lead coming into the last few miles of bike path into Aspen.

I caught myself enjoying the beautiful scenery and changing leaves a few times, and my feet felt great in my La Sportiva Vertical K’s. But I tried to keep pushing myself and ended up finishing in 1 hour 42 minutes 45 seconds. Good enough to cut just over five minutes off my time from last year and over three minutes ahead of Lindsay Krause. It was really nice to finish the summer knowing that my hard training sessions thanks to Lindsay Hyman at Carmichael Training Systems had paid off. And since my heart rate monitor strap battery is taking a break, I figure it’s time to enjoy a small off season, especially since I have not had one since Axel was born two and a half years ago. But, I have the feeling I will find another race soon.

Lindsay Krause and I winning some dough

Full results can be found here. 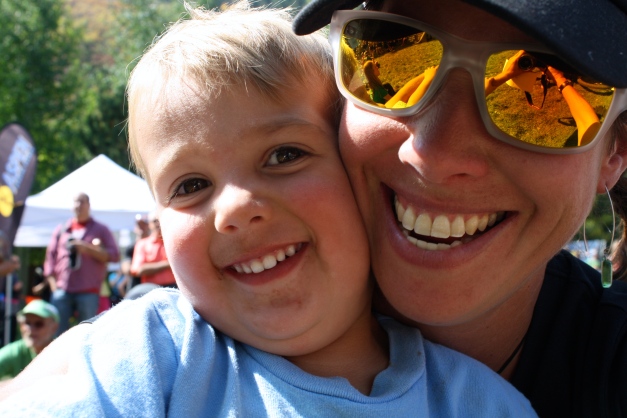 Autumn has always been my favorite season in Colorado and this weekend reaffirmed that.

Despite being a little sore from the Lead King Loop last weekend, I continued a hard week of intervals and training thanks to Lindsay Hyman at CTS. On Friday, I enjoyed an easy day to prepare for the Golden Leaf Half Marathon on Saturday.

I took the last two years off from the Golden Leaf but three years ago I managed to pull off a win with a time of 1:45:47. My main goal this year was to better that time by a few minutes.

Training on the road with the kids in the Chariot has helped my speed on the flats and the descents but my pace on the steep climbs has suffered. This was obvious both last week and this week as I struggled up the starting climbs in both races. As the Golden Leaf course topped out and started heading down the Government Trail, I began to feel stronger and eventually found I could to push the pace.

Axel, Sari & Juniper at the finish of the Golden Leaf

I finished as the second woman in 1:47:52, four minutes behind Stevie Kremer from Crested Butte and two minutes slower than my time in 2008. After talking to many of the racers at the finish, we agreed the course was at least a few minutes longer than a few years ago so I figured my pace still was a bit faster.

Overall, I was  happy with my race and how strong I felt throughout the 13.1 miles. I even managed to get in a brick of sorts, with a mountain bike ride in later that afternoon for an hour and a half.

Sunday continued a great weekend as Ian and I joined about 10 other Roaring Fork locals for an amazing fall mountain bike ride.  The perfect weather and spectacular views quickly cured my tired legs.

As we descended a newly built trail, Ian and I were forced to make the decision to cut out and head back home to the kids. As much as we would have loved to ride another hour or so, we figured a five hour ride together was a sweet opportunity and we shouldn’t push our luck much more.

Finishing up the day with some family time completed the golden weekend. Here’s to hoping we have more beautiful days of training before I head to Tasmania for the Adventure Racing Wolds.