Back to the Beginning?

Just two weeks ago, as I mentally prepared to go in for another small surgery on my ankle, I got a call from Jari Kirkland asking me if I could go to Ecuador for an adventure race. I told her that I was nowhere near trained for it. Of course, I really wanted to go. I talked it over with the guys from the team and told them that I might be a liability—they didn’t care. Ian told me that sure, it might not be prudent for me to race, but how often do you get a free trip to Ecuador. So, 24 hours later, I decided I was in for the Nonstop Ecuador Es Tu Cancha race.

I’m very excited to get out for another adventure race and to see Ecuador. My training has been upped significantly, adding some night riding and paddling.

Heading out for a night ride in Moab

Summit of Mt. Sopris. Round trip of 3 hours 34 minutes and elevation gain of 4,390 feet 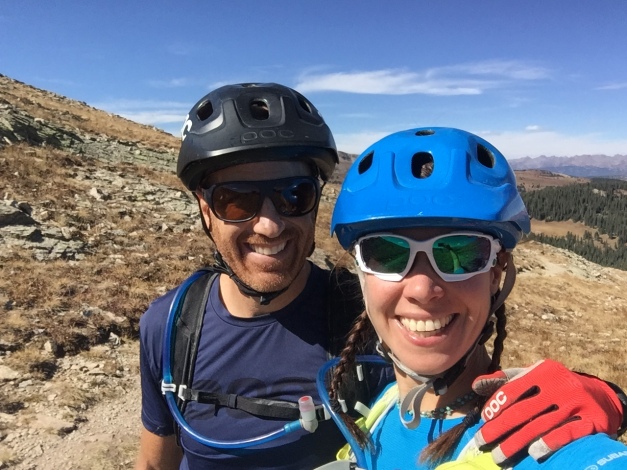 Ian and I at the top of Searle Pass, 12,034 feet, on the Dirty Copper Triangle

I have a few more weeks squeeze in some training, especially at elevation (Quito is at over 9K feet!). I plan on running the Four Pass Loop this weekend and getting out on a few long rides. This race will be a wildcard for me, but I’m excited to have a goal to work towards and it’s motivated me to be as ready as possible.

Max Taam, Jessie Young and I planned to run the Four Pass Loop outside of Aspen yesterday however the weather did not agree with those plans. As we started running from Maroon Lake, a light rain fell. Reaching Buckskin Pass after an hour and twenty minutes of running, we made the decision to run to Snowmass Lake then to Snowmass Ski Area and possibly across the Government Trail back to my car.

Jessie heading up towards Buckskin Pass early in the morning.

With the weather holding with clouds and no rain, I suggested we run up East Snowmass Creek to East Snowmass Pass and Willow Pass. Despite Jessie being hesitant for about 30 seconds, it didn’t take much convincing. If the weather rolled in, we could always turn around and be at Snowmass Ski Area and out of lightning danger very quickly. Plus, then someone wouldn’t have to take the bus back up to Maroon Lake to pick up the car. 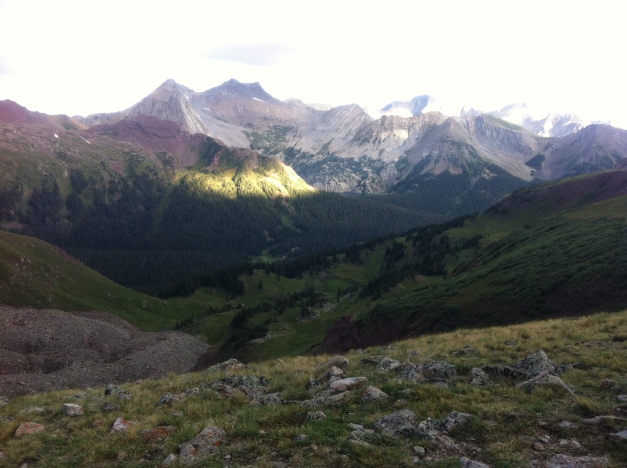 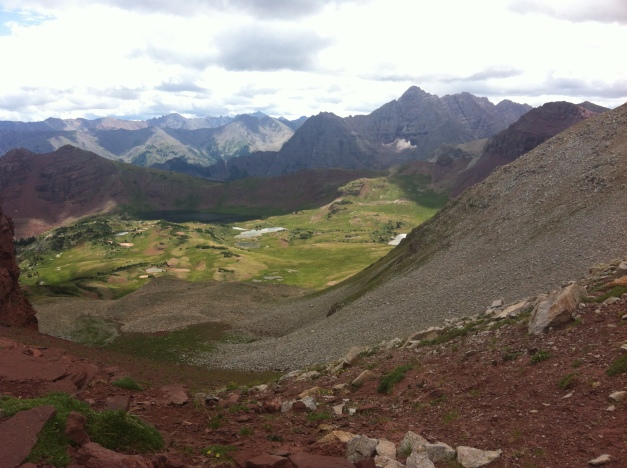 East Snowmass Pass looking down at Willow Lake. We descended into the valley and up Willow Pass on the right.

We took our time, enjoyed the lakes and passes but got in just under 31 miles with over 10,000 feet of elevation gain. The rain stayed away long enough making us wonder if we would have been clear on the Four Pass Loop where our best escape would have been to Crested Butte or Marble. Next time we’ll get the full loop however our new ‘Three Pass Loop’ was a great alternative.

Willow Pass with the Maroon Bells and our trail back to Maroon Lake.

Garmin stats can be found here.