For those of you who have been following along, it’s been four months since my ankle surgery. Back in December, the day before I went under the knife, I skinned up and skied a couple laps on Buttermilk. I figured those would be my only turns of the season.

Today, I skied for my second time this season. And damn it felt good.

I had an appointment with my surgeon Dr. Clanton and my physical therapist Ana at the Steadman Hawkins Clinic in Vail this morning. Dr. Clanton said I’ve made great gains in my range of motion. I still have a long way to go but things are right on track. Phew!

Every time I visit with Dr. Clanton, I ask him what activities I can do next. First, I got the green light for road biking. Then I got the ok to swim. Then I had a small set-back when the doctor prescribed a follow up surgery in March to snip some fiber tape that had been added as an extra ligament in my ankle. Thankfully, that surgery only put me out of commission for a week.

Today, like a kid asking for desert after dinner, I asked if I could ride my new mountain bike (a ridiculously sexy, 19 lb Scott Scale 29er).  The doctor and Ana thought about it for a minute, nodded to one another and then said okay. Sweet!

Of course, it snowed over a foot here in the past two days and all anyone can talk about is the awesome skiing. I wondered if I should push my luck and ask? Fully expecting the answer no, I sheepishly asked if I could skin and ski. And then, BOOM, in unison they said, “sure.”

So what did I do as soon as I got home? I picked up Ian and Skid the Dog, and bee-lined it to Tiehack. I tentatively slid into my La Sportiva boots, worried they might hurt my ankle, but to my relief they felt fine. I started slowly up the skin track, but in short order I was pushing the pace and steaming ahead. It felt great. My heart rate hasn’t been that high in months and I relished the endorphin rush.

I took it easy on the descent, especially since the snow was pretty set up, but it didn’t matter–I felt free again. 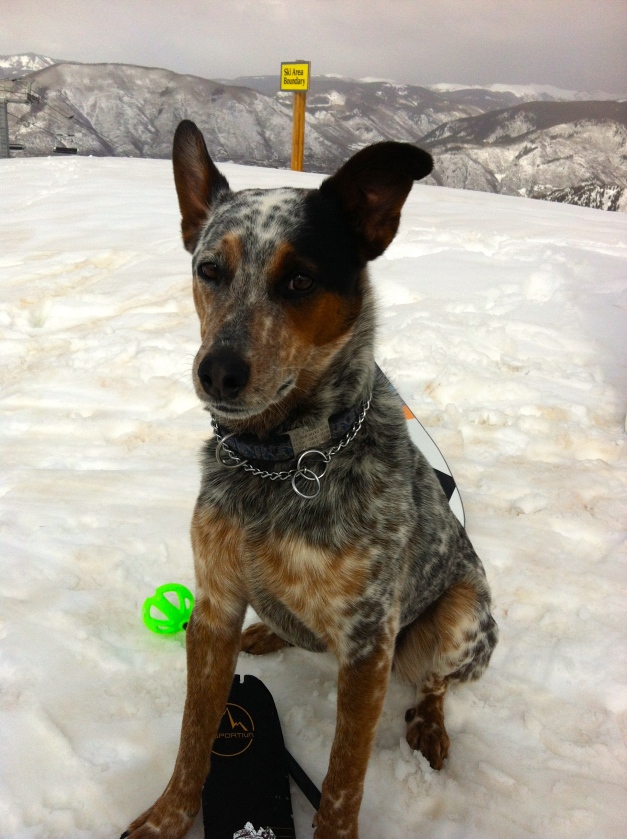 This was Skid’s first ski of the season too. I think he enjoyed it almost as much as I did.

Ian and I happy to be out together. Thanks to my parents for watching the kids.

Apparently no one taught the dog not to blink during pictures.