One thing I’ve learned over the years is that the biggest challenge in endurance racing is proper nutrition. In my younger, dumber days I once tried to ride 24 Hours in the Sage solo, subsisting on little more than Twizzlers and Coke (I ended up doubled over in the fetal position after about 12 hours). More often than not, it’s stomach issues that sideline endurance racers before their legs give up.

As Ian and my friends in Carbondale will tell you (because I’ve been complaining non-stop) I’ve been dealing with an ongoing intestinal issue for almost a month now. I’ll spare you the gory details, but let’s just say I haven’t been able to eat much and I’ve spent a lot of time in the bathroom. I went to a specialist last week for blood work and I have a colonoscopy scheduled this week—yippee!

So this is the perfect time for me to do a 12 hour mountain bike race, right?!

I’ve raced the 12 Hours of Snowmass twice before on a three-person team and this year I decided to try it solo—my stomach be damned.  Just over a week before the race I went gluten-free, mostly as an experiment. Little by little I started to feel better all week. I spent Thursday prepping a bunch of gluten-free race food: Allen Lim’s rice cakes and Heather Irmiger’s scones. I hoped those, along with Honey Stinger chews and new Stinger organic gels would get me through the race (sadly I couldn’t eat the Stinger Waffles).

Fast forward to lap 10, hour 11 of the race on Saturday. After over 20,000 feet of climbing followed by a whole bunch of punishing (but really fun) descending, I still felt great. Ok, sure my legs were tired, my back hurt a bit, my arms were exhausted, etc., but my stomach felt just fine. Gluten-free? SOLD.

Rob Russell gets me going out of the transition area

The 12 Hours of Snowmass course is almost entirely singletrack with just over 2,000 feet of climbing each lap – brutal but fun!

I finished the race with 10 laps, three laps ahead of the next woman and in fifth place overall. Most of all, I’m proud of the fact that my laps times were pretty consistent. The legendary Tinker Juarez won the men’s race with 11 laps. Full results here.’

Big thanks to Joel Mishke who hooked me up with a rental bike for the race, Scott Leonard for loaning me some wheels, Rob Russell for helping me with support and kid wrangling, and of course Nat Ross for organizing another awesome race in Snowmass. This post’s sponsor shout-out goes to Westone. I wore their UM1 earbuds for the entire 11+ hours I was racing and they never got uncomfortable and kept me rocking the whole time.

Also, congrats to my Honey Stinger teammate Max Taam, who along with John Gaston and Keegen Swirbul, kicked ass to with the three man race. 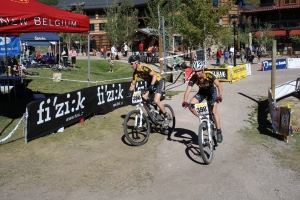 I seem to be perpetually slacking on keeping this site up to date but that usually means that fun is being had. And this has not been an exception.

A few weekends ago we packed the family up for some camping, riding and playing in Crested Butte. Despite getting kind of a late start, both Ian and I were able to get in rides on Saturday afternoon and the kids had a lot fun playing in the dirt at the campsite. Unfortunately Juniper spent about four hours of the night coughing in the tent so we decided to cut the trip short and head home a day early. But of course Ian and I both squeezed in great rides before taking off.

Sometimes things work out for the best as we convinced our friend Mike to watch both kids on Labor Day so we could get out for a ride together. After listening to Ian talk about a newer trail at Prince Creek he finally had a chance to drag me around on it. Doing my best to keep Ian in sight, failing most of the climb, I thoroughly enjoyed the descent despite clipping my handlebars on trees numerous times.

Axel taking advantage of some Mom time between laps.

I have no recollection of training the following week (or was it two weeks) but eventually we raced the 12 Hours of Snowmass as a team of three. The course was a few miles longer than two years ago when I first raced in the inaugural event and the additional single track was a great addition. The Honey Stinger team cleaned up with wins in the Duo Men (Scott McCalmon & Nate Bird) and in Trio Coed (myself, Ian & Michael Hayes)  and second place in Women’s Solo (Kris Cannon). Nate and I also managed to record the fastest laps for men and women helping make the weekend very successful and super fun.

Continuing on my record streak, Ian and I managed a few more mountain bike rides together during the week since my mother-in-law was visiting. I think we have ridden together more this past week than we have in the last three years!

Finally, friend and Honey Stinger teammate Todd Kennedy and I managed a great ride up high yesterday afternoon. Probably the longest climb of my season (2-1/2+ hours) up to the top of Red Table Mountain from Cottonwood Pass with some of the best views I have ever witnessed. Despite some cyclocross riding on the descent due to downed trees we discovered some fun single track and rode into Gypsum finishing up a fun adventure. I always forget how much I enjoy the long adventurous rides until I get out one every few months.

My legs were a bit sluggish this morning on my run with the kids in the Chariot but I’m enjoying getting back into shape after baby number two. Lindsay at Carmichael continues to get me out doing intervals and getting me racing again. I may just be ready to really race 24 Hours of Moab this October!

Rob tags Sari for the next lap

Yesterday marked a first for the Anderson family: Ian and Sari actually raced together.

Typically, I’m far too slow for Sari to race on a team with me, but the format at the inaugural 12 Hours of Snowmass was perfect for us. It allowed us to all race at our own pace and switch off laps (and babysitting duty). We teamed up with our buddy Rob Russell and entered the Co-Ed Trio category. Just for fun, we all raced on our singlespeeds.

We had a great day of racing. It was a terrific 7-mile course that featured over 1,500 feet of climbing and lots of fun, technical singletrack. The weather was spectacular with a hint of fall in the breeze and even a some golden aspen leaves covering the trail.

Our team name was “Chicked,” a term guys use when they’re getting beat by a girl. Sari didn’t disappoint and clocked the both the fastest lap on our team at 47 minutes, as well as the fastest overall female lap for the day, netting her a nice cash prize and a sweet tent from Ground.

In between laps we all traded off duties watching Juniper, with support from Rob’s wife Elinor. Juniper was a champ, ringing the cowbell for us and eating lots of our race junk food.

Our team placed first in the Co-ed Trio Division, finishing a total of 14 laps (5 for Ian and Rob, 4 for Sari).

Juniper steals the spotlight on the podium

Oh yeah, there was also this guy by the name of Lance at the race. I had a nice conversation with him on the course. It went something like this:

Lance: Passing on your RIGHT!

Ian: (gasp) So, I hear you’re training for the Tour de France again? Don’t you think races like this are more fun? Hey, my wife is an adventure racer, and she’s sponsored by Nike too! You guys should totally do an adventure race together.

Anyway, my colleague and friend Len Zanni, along with his teammates Lance Armstrong and Max Taam held off a late race surge by Team Beaver Creek to win the trio men’s category. Full recap here.

My favorite part of the day was when Sari showed up at the race after letting Juniper sleep in, and almost killed Lance. Sari was in a hurry, head down, pushing Juniper up the hill in the Chariot. Lance was doing some warm up in the grass and very nearly collided with Sari, Juniper and the Chariot. In a move that was eerily reminiscent of Stage 9 of the 2003 Tour de France, Lance narrowly avoided Sari, et. all.

Len and Lance on the podium

This weekend Ian and I have entered in a nice little local race with our buddy Rob, the inaugural 12 Hours of Snowmass. We’re all going to be on singlespeeds and while we’re planning to race hard, we were thinking it was going to be really laid back and casual.

Then Lance Armstrong went and messed it all up.

Lance with Lenny close behind at Wed's local race.

On Tuesday, Lance announced he is coming out of retirement to win #8 next summer at the Tour de France.

On Wednesday, Lance showed up and raced at our final Aspen local series race. Recap here.

And then today our buddy Nat Ross announced Lance will be racing at the 12 Hours of Snowmass this weekend.

Lance will be racing on a 3-person team with Ian’s colleague Len Zanni and local phenom Max Taam. These three should have been a shoe-in for the win, but then my Team Nike teammate Mike Kloser caught wind of it (courtesy of quick call from local DJ and instigator Steve Leigh).

Twenty minutes later, Kloser had his own team for the Snowmass race: Dave Weins, who beat Lance at the Leadville 100 in August, and Jay Henry, who is a perennial winner at the Mountain States Cup and sometimes races with Team Nike.

I wouldn’t be surprised to see a couple other pro teams enter at the last minute as well.

Unfortunately for Ian, Rob and I, we have to compete in the same category as these hammers. We have no hope of keeping them in sight, but we will have a front row seat for the Battle Royale. Look for an update early next week about how it all pans out.