Sari is too modest to say it, but she’s had a really impressive string of victories so far this summer. She’s stood on the top step of the podium at the Voodoo Fire, the Half Growler, the Teva Mountain Games Ultimate Mountain Challenge and the Bailey Hundo.

So for me, waiting at the start line of Firecracker 50, with Sari as my co-ed duo teammate, I felt more than a little pressure to keep her winning streak alive. For the two lap race we decided that I would go first, so Sari and the kids cheered on the sidelines as I joined 700+ racers leading out the annual Breckenridge 4th of July parade.

There were 50 other teams in our division and the pace from the start was fast. There was no way I could hold the wheel of guys like my Honey Stinger teammate Nate Bird, who was also racing on a co-ed team, so I just went as fast as I could.

I got caught in some of the traffic that stacked up on the singletrack, but overall I had a clean lap, keeping the rubber side down and avoiding any flats or mechanicals. I came into the transition, tagged Sari, and apologized for losing time on the leaders. She said no problem and sprinted out of the corral chasing down a 7-minute gap to the first place co-ed team.

Of course, there was one minor detail she neglected to share with me as she left–where are our kids?  Ok, so we’re a little new to this co-ed team thing. When I saw they were not at the transition area in Carter Park, I figured they were at our friend’s Mona’s house in Breck, where we spent the night. Sure enough, Amy Macy (Travis’ wife) was watching them and they were happy as clams.

A dusty daddy, happy to be done.

Sari, out on course, caught the leaders in short order. From there she, “had a pretty relaxing race” and even stopped to help a couple friends like teammate Wade Newsom who was dealing with multiple flats.

Thanks to her speed, we won our division by over 10 minutes. 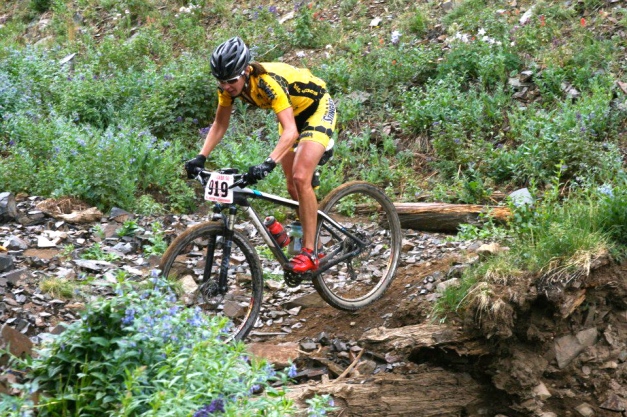 Of course, there was a part of me  that wished Sari had raced in the pro women’s category. Gretchen Reeves had a great race and won for her third time this year–I think she and Sari would have had a great battle along with Kelly Boniface, who despite a double flat, held on to second place.

But, by racing as a team, we didn’t need to worry about a babysitter, we both got to compete in one of our favorite races, and best of all, I got to experience the rarefied air atop a podium alongside my wife. As you can see from the podium photo, they might as well call the co-ed division, the “family hand-off category.” Full race results are here. Congrats to Jay Henry for winning the pro men’s division, again. In just his second year as a pro, Pete Kalmes, another friend and Honey Stinger teammate from Steamboat, had a great race and finished in sixth place. A big hats off to Jeff Westcott who once again organized an awesome race.

Sari and the kids at the finish

Oh and because I know some of you are wondering…who won the real race at the Firecracker? My Garmin read a lap time of 2:03, Sari’s said 2:05. So yeah, we’re pretty evenly matched. 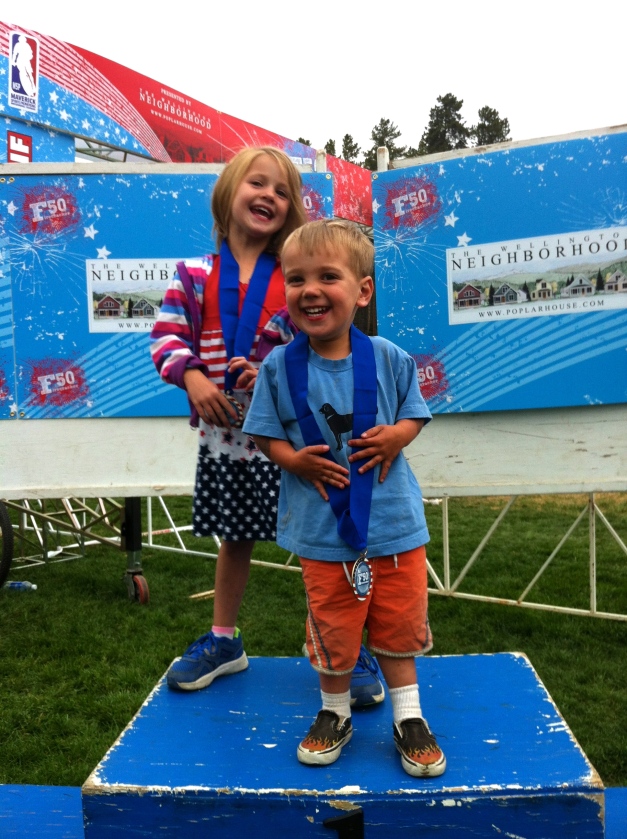 The new Honey Stinger organic gels are awesome. To be honest the original gels were too sticky and honey sweet for my palate, but I really like the new formula. I sucked one down before slogging up Little French Gulch and it saved me. Also, both Sari and I tried some new Bontrager tires for this race. I used the 29-3 in a 2.25″ and Sari tried the 29-1 in a 2.2″.  We compared notes at the end of the race and both agreed we liked the new rubber.  In my opinion, like so many things on a mountain bike, a good tire is one you don’t have to think about–it does its job and sticks to the dirt. The Bontrager sneakers did not disappoint.

Posted by Ian on November 3, 2011
Posted in: Race Coverage. 2 Comments 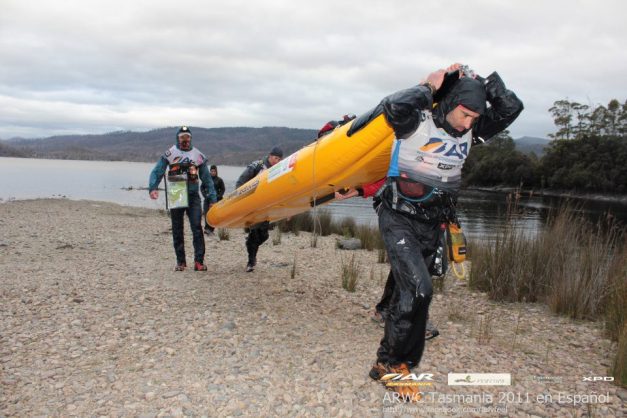 I don’t know about you, but I’m exhausted. Following this race is hard work. I keep hoping that if I click the GPS tracking map over and over again all day long, our team will go faster.

Anyway, Team Buff Thermo Cool has reached the halfway point of the race, where they have a mandatory six-hour rest and get a hot meal. Impressively, Sari found a computer and managed to send this message:

Buff is six-hours behind the lead teams, Seagate and Silva. They are “carrying a 2-hour penalty” because apparently one teammate lost their required race jersey somewhere along the way. With the penalty time factored in, they are in ninth place overall. There is still a long way to go, including a 65km trek along the coast, followed by a 150km mountain bike leg. Team Buff is healthy and strong and they still have a great shot at the podium. Thanks for following along and supporting Sari! 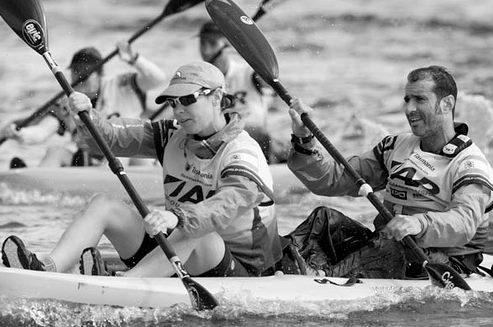 (Sari and Fran paddling in the first 17k leg)

Howdy. Sari’s slower, lazier half here – reporting from the comfort of my couch. Here’s the latest on the race in Tasmania (from what I can glean online, half a world away).

-paddled 17km
-trekked 20km through the Tassie bush (do I sound like a local?)
-shot at clay pigeons and missed, resulting in a 10 minute penalty
-navigated through a series of caves
-mountain biked 50K
-trekked 60k

From there, teams were supposed to do a waterfall rappel, but it sounds like that section was cancelled. Then, the course gets really strange. Apparently each four-person team has to squeeze into one, two-person inflatable kayak for an 8km paddle. Why, I don’t know. After that unnecessary bonding experience, the teams have a 20km paddle in their own plastic kayaks to a transition area at the end of Lake Mackintosh.

If you’ve been watching the GPS tracking or the leaderboard, you’ve noticed that Team Seagate took a commanding lead early in the race. Seagate is made up of a bunch of legends in the adventure racing world so it’s no surprise they’re in front. Team Buff fell back to 10th place after their shooting penalty, but the latest GPS data has them in fourth place less than two hours behind the leaders.

The top three teams (Seagate, Silva and Blackheart) will all be tough to beat, but keep in mind the race is less than half over. After this paddling leg, teams have a 105km mountain bike, followed by mandatory six-hour rest zone. Then there’s a 65k trek, a 150km mountain bike and a 75km paddle. The race is still anyone’s game.

Thanks for reading and for cheering on Sari! 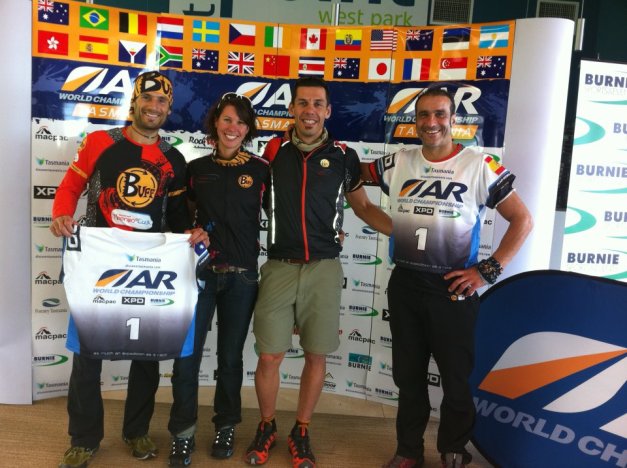 Hey there race fans! Ok, more than likely you’re a Sari fan. And if like me, you prefer enjoying a 6-day, 450-mile adventure race from the comfort of your couch/desk/smartphone, I’m here to help. For the next few days, I’m going to hijack my lovely wife’s website and attempt to provide somewhat regular updates on the race in Tasmania.

Here’s a very cool Google Earth overview of the course:

And here’s a blow by blow description of the course.

The race started today, or tomorrow at 9am if you live in the Australia Western Time Zone. I’m not sure it’s fair, but somehow those Aussies/Kiwis get to live their lives a full day and a half before us. But I digress. The race began on Wednesday morning local time with a 17km sea kayak leg followed by a clay pigeon shooting challenge, where one teammate had to hit one of five targets. I’ve seen Sari shoot an air rifle and she couldn’t hit a chipmunk if it were gnawing on her foot. Unfortunately, it seems her teammates are as bad a shot as she is and they failed the challenged, which resulted in a 10-minute penalty. No big deal in a race this long. The team is now off on a trek, followed by a mountain bike ride and then a caving adventure(!?).

I suspect the top teams will stick pretty close together in these first few days and the race won’t really start to shake out until day 3 or 4 when sleep deprivation and fatigue really set in.

From what I can tell, the favorites in the race are Team Silva (#9), Team Seagate (#2) and Team Blackheart (#3). But, this is adventure racing and mechanicals, injuries and sickness can slow down even the fastest, best prepared teams.

I’ll try to post updates daily here, but if you want to follow along with the race and join me in yelling at your computer screen when our team takes a wrong turn or is moving slow, here are some options.

The teams actually have to stop and blog at several points during the race. Once I find those posts, I’ll be sure to share them.

Otherwise, thanks for following and supporting Sari!

This afternoon I’m leaving for Tasmania to race in the XPD Adventure Racing World Championships. I got the call to race as part of Team Buff Thermocool when their regular female teammate had to bow out because of an injury. With a little more than a month’s notice, I’ve been training hard and I feel pretty well prepared.

Packing for an expedition race like this is practically a race in and of itself. My gear list is below. Somehow, I managed to fit it all in one huge duffel bag, one bike box and one carry-on backpack.

Thankfully I didn’t have to pack Hank the dog

My awesome new Polartec Neoshell jacket that weighs less than 5 ounces (also, apparently it can be really buggy in Tasmania..and dark).

Ian is going to try and update this site with whatever race reports he can find online. Wish me luck and thanks for all your support!