I have a love/hate relationship with the Teva Mountain Games. I love that I met my husband at the event ten years ago. I love the world-class competition that comes to Vail for the four-day festival.  I love catching up with old friends. I love all of the activities for kids at the event. And, I love the opportunity to win $2,000.

I hate the schizophrenia of doing four races in two days. I hate the pressure that I feel to perform in front of so many friends and media. I hate the juggling act that Ian and I try to perform as I race, he works the PR for the event and we both try to keep the kids happy and entertained.

Apparently, the love outweighs the hate as I was back again this year competing in the Ultimate Mountain Challenge.

Each year the racing begins with the downriver kayak sprint. A year ago, Gore Creek was almost at flood level for the race. This year, with a record low snowpack, the creek was barely a trickle, making the race much more technical, or ‘boney’ as paddlers like to say. I did a practice run on Friday evening and it helped me stay on line for the race Saturday morning to finish with a 45-second lead over my good friend Gretchen Reeves, and about five minutes over Sara Tarkington (who had never paddled whitewater before).

With a few hours to organize and hang with the kids before the mountain bike race, I managed to hand my bottles off to my coach Lindsay Hyman from CTS and get in a warm-up. I was a bit bummed to find out Gretchen, Sara and I had our own start time two minutes behind the pro women. Since I don’t do many mountain bike races with the big girls, I always enjoy racing among the Olympians that show up for the Teva Mountain Games. Anyway, after our three person category start, my legs felt like lead for the first climb while Gretchen and I traded spots in the lead. Over the first two laps, I managed to gain about a minute lead on Gretchen while she and I rode up through the pro field. Gretchen blistered the last lap and pulled me back in to just 26 seconds. Had we started with the pro field, we would have been 5th and 6th and in the money. 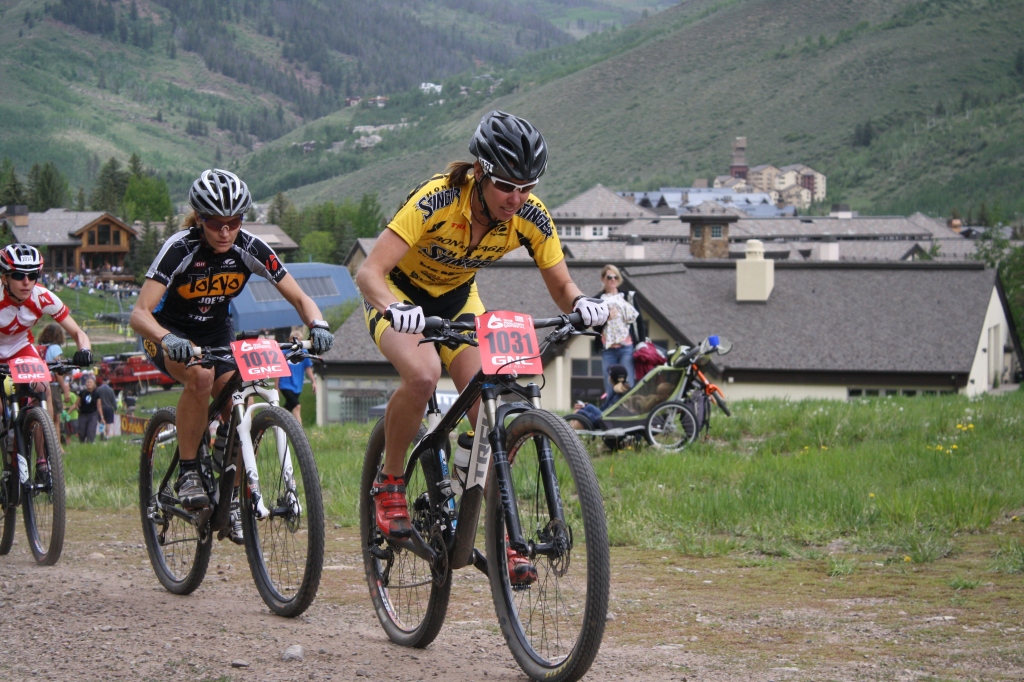 After the mountain bike race, I enjoyed the afternoon with the kids while Ian waited out the rain and lightning to race a shortened mountain bike race. Being cold didn’t seem to slow him down as he placed second in the Vet Expert 35+ category, just 10 seconds behind the winner. A late dinner with friends and six kids under the age of five got me to bed a later than I would have liked, but that’s the nature of this event.

With just over a minute total lead over Gretchen, I knew I had to run and ride strong on Sunday. Unfortunately for Sara, she did not have her best mountain bike race so she was sitting further back. After warming up and feeling less than stellar, I decided I would run my own race, try to keep Sara in sight (at least on the more open sections) and attempt to increase my lead on Gretchen. Pushing through the pain of the first climb straight up Gold Peak, I fell off Sara but kept my head down and raced smart. By mile three, I started to feel pretty good, passed some men and slowly started to catch back up to and eventually pass Sara. I never looked back for Gretchen knowing I was running the best race I had in me. I wore the new ultralight Vertical K trail running shoes from La Sportiva and they felt awesome. I finished the run as the 5th woman overall (again) and increased my lead to about eight minutes.

One of these days I will learn that sometimes the worse I feel in the beginning of a race, the better the race is overall. 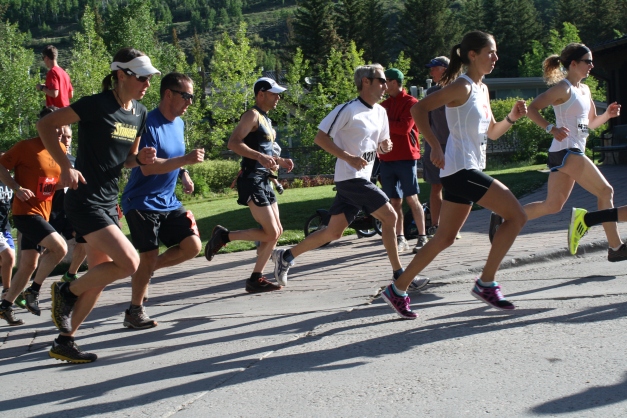 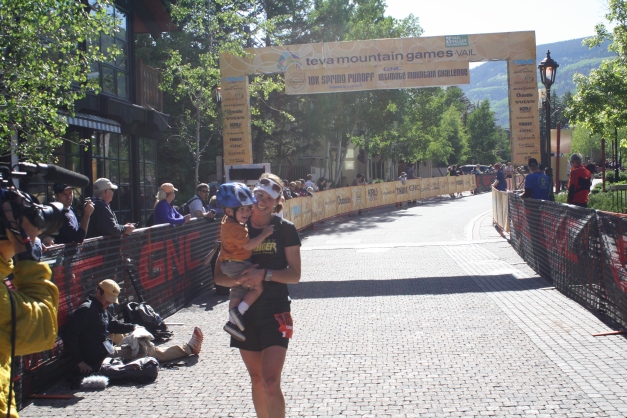 After the 10K run, Ian took the kids around the event for a few hours so I could rest as much as possible for the final TT race. I took full advantage to eat and chat with Lindsay. To save every second possible, I threw on the skinsuit Ian got me in France last year and then jumped on the road bike for a short warm up. Starting the time trial 30 seconds and one minute in front of Gretchen and Sara respectively, gave me the advantage of knowing where they were at all times. Both of them passed me together in East Vail and I managed to stay with them for a few minutes before I dropped back. Keeping them in sight and no mechanicals became my goal as I knew that would keep me in the lead after the four events.

Sara Tarkington, me and Gretchen Reeves before the TT start 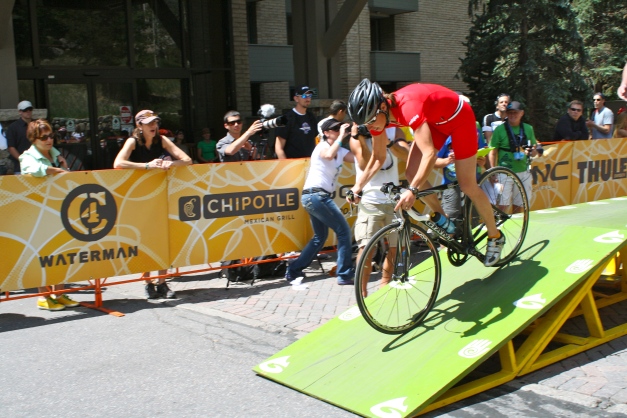 I did lose two minutes on the time trial but kept my overall lead. Relieved the racing was over, Sara, her fiance Doug, and I coasted down Vail Pass. As much as I hated the pressure of the races, I was very excited to win over such amazing women like Gretchen and Sara. I love that we are all friends and fierce competitors.

Impressively, my friend Josiah Middaugh won his SIXTH Ultimate Mountain Challenge title for the men. He has a great recap of his weekend here.

Gretchen and I have traded places on the podium many times in the Ultimate Mountain Challenge.

Ian and Michael Schilling. One of these days I’ll skip a training session to take a photography class because my skills are seriously lacking.

Throughout the weekend many people asked me how I do it all with two kids and there’s no way I could be doing any of it without Ian’s support. And thank you to Lindsay for the support as well as Honey Stinger, Bontrager, Trek, La Sportiva, Acli-mate and to my friends cheering me all weekend.