Early this morning I enjoyed my first skin and ski of the season. Thanks to Axel, I made it to Tiehack early enough to get in two laps. Despite being a balmy 3 degrees, I stayed dry and warm in multiple Polartec layers even after crashing on turn number one of the season. The moon was almost full and Venus was shining as bright as I’ve ever seen it as the sun rose and the sky blossomed pink. It was enough to convince me that I’m ready for winter and ski mountaineering race season.

Yesterday started me off on winter as I ventured out on a road run with the Chariot on super icy roads. At the last minute I changed into shoes fit with La Sportiva hobnails which is the only reason I didn’t land on the ground at the end of the driveway. The Chariot floated over the ice and I enjoyed a nice five mile run while most other people were forced into days off or into the gym.

Another blizzard is supposed to be on the way tonight and tomorrow so I guess it’s time for me to hang up the bike and get on the skis. Now I just need to get a pair of the new Sportiva race boots, skis and bindings to get me going faster. 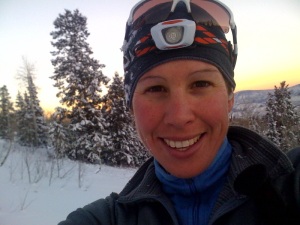