We’ve truly entered a different world. And it’s filled with lots of lyrca, cowbells and accordions.

For most Americans, a hardcore sports fan is someone who gets to the parking lot at 9 a.m. with his RV to set up a huge tailgate spread before the big game. This is a hardcore Pierra Menta fan in France: 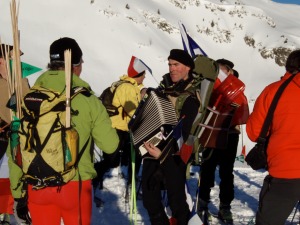 That dude lugged an accordion up over 3,000 feet on his skis…at 5:30 a.m. Impressive. Most impressive. Unfortunately, I didn’t get to see him try to ski it back down.

The first day of the Pierra Menta started at 7 a.m. sharp. Katie from Kalispell (whose husband Brandon French is racing) and I started skinning at 6 a.m. to catch the top teams at one of the early transitions.  We skinned for about an hour and this is the scene that finally greeted us at the top. Pretty cool. 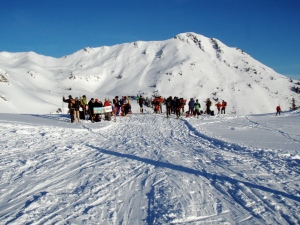 The French take their randonee racing seriously. We saw more spectators in skin-tight ski suits than I’ve seen racers wear at any single race in the US. That, and pretty much all the spectators skinning up were wearing super lightweight race gear and carrying huge, oversized cowbells. When the first French and Italian teams cruised up to the transition, the crowd went nuts. Everyone was shouting “Allez, Allez!” with a few “Venga, Venga!” thrown in, all  against a steady din of accordion music, singing, clapping and the ever-present helicopter flyover. Here’s one of the members of today’s winning French team at the first transition:

For us Americans, it was certainly a bit humbling to watch just how fast the European teams are, especially the French and the Italians.  Hell, the top Italian women’s team beat our fastest men’s team by almost 10 minutes.  Regardless, Team America had a solid day, especially if you keep in mind that rando racing is just in its infancy back home.

Pete Swenson and Cary Smith finished the day in 47th place, about 40 minutes behind the overall race leaders. Brandon and Jared were just a few minutes behind them and Brad and Jason behind them. Sari has not yet recovered from whatever stomach bug/parasite/nastiness she brought back from China so she and Mona struggled, finishing in eleventh place for the women…a bit disappointing. Nina and Linsay finished in eighth place for the women. 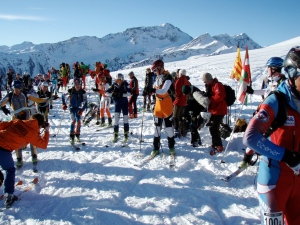 Pete and Cary at the first major transition 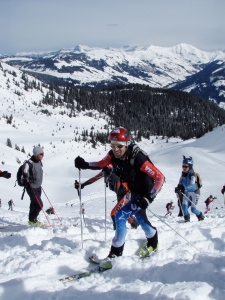 Jason is all smiles in his Team USA kit 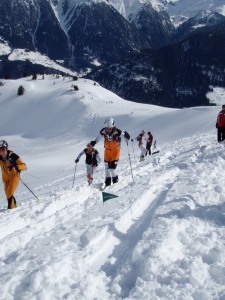 Sari, head down, grinding it out on the last climb of the day.

We’ve spent the evening looking for some Cipro for Sari, a drug that will apparently solve her stomach woes.  So far no luck. We’re hoping she feels better by tomorrow for a long stage that includes 2,700m of climbing over 20+ km of racing. Stay tuned.