Forne about to fumble the paddle. Photo courtesy Mike Bitton

It’s pretty tough sitting thousands of miles away in front of a computer, wondering what’s happening in the race when your team is moving slower than they should.

Is someone hurt? Sick? Did they take a wrong turn? Was there an equipment failure?

Turns out, today’s somewhat disappointing 6th place finish in the prologue was due to a broken boat, followed immediately by a lost paddle.

Read the full account from Mike Bitton on CheckpointZero.com here, but essentially Team Nike lost 5-8 minutes in today’s stage when the rudder on Chris and Sari’s kayak broke and then Chris lost his paddle while trying to fix it. Sari had to turn the boat around all by herself to go and retrieve it.

Six minutes in a six day race isn’t that big a deal, so hopefully they can make up the time no problem. 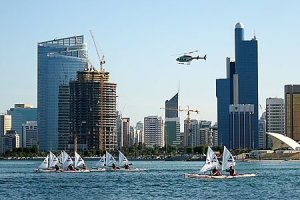